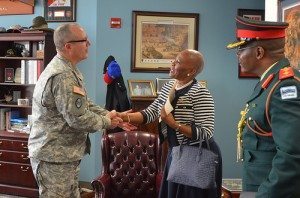 Alotech was one of two NC companies invited to meet with Ambassador Dr. Tebelelo Seretse and Military Liaison of Botswana, Colonel Bruce Thobane during the delegation’s visit to the North Carolina Emergency Operations Center last week. Francis Chester, VP of Sales and Marketing for Alotech presented options for water purification solutions for military and civil emergency applications in Botswana. Also attending the briefing were officers from the NC Army National Guard and a representative from the US Department of State.