Goldston-based Alotech celebrated its recently expanded frontiers with an open house last Wednesday, which included a tour of its 208,000 square-foot facility.

…..the highest praise came from NC Secretary of State Elaine Marshall, who attended the open house. “I think I’m at the most important meeting in North Carolina today,” Marshall said. “We’re talking about the future”

Alotech was not a company that was just getting by or hanging on, she went on to say. Instead, it was thriving and growing in the post-recession world. 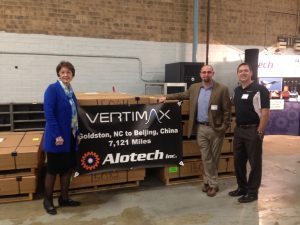